Performed by the Frank Vignola Trio, 2011; uploaded by Weet Larcovic.

Stop me if you've heard this one: a media company does a promotion, is totally unprepared for the traffic it generates, the servers are obliterated so that legitimate customers can't access their stuff, and all the while pirates are still able to trivially obtain the media in question.

I'm talking about Comixology and Marvel, but I could just as easily be talking about EA ('cept that last part I guess; to my knowledge there's no crack to run SimCity without a network connection as yet).

Marvel started a big promotion the other day: 700 free issue #1's through Comixology.

The demand took down the Comixology site for two days. And it's still running slowly.

To blame for all this? Two things:

Well, I should say "to make sure nobody else can set up a legal mirror", because, well, if you've been on the Internet for five minutes and are not a complete dumbshit, you're probably aware that anyone who wants those comics can trivially find pirated copies.

Go the legal route, with Comixology? You get a proprietary file that you can only read in their program. Provided you can access their fucking website at all.

Go the illegal route, through some dodgy website? You get a CBR, or a CBZ, or a PDF, which you can read in any program that supports that format. And you don't have to worry about whether a single specific website is actually working in order to acquire that file.

It doesn't take a fucking genius to see which is the superior, more customer-friendly option.

Let's talk about what customers want. Hey, I like comics. Let's start with me. Here, maybe this will help you get a feel for just how much money you could potentially squeeze out of me: 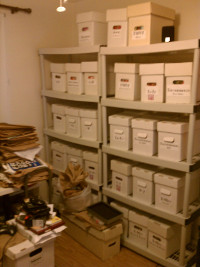 Not pictured: 14 more shortboxes, plus about 2/3 of a bookcase taken up by hardcovers and trades.

My point is, I have spent a fuck of a lot of money on comics over the course of my life.

You know how much I've spent on Comixology? Zero. The Dark Horse digital store? Zero.

And make no mistake: that's not just because I prefer physical comics. I do, but I've downloaded any number of free comics from both those stores. I've read them and I've enjoyed them. I'd be adding those 700 Marvel #1's to my collection right the fuck now if the website were functional.

But free is the amount I am willing to pay for a DRM-infected book, comic or otherwise. If you won't let me read the file on whatever computer I want, in whatever program I want, then you're not getting a damn dime from me.

I realize I'm not the guy Comixology's trying to appeal to here -- they're trying to draw in new readers, not people who know what happens on Wednesdays. I get that. I'm not the target audience here.

But the target audience is getting timeouts too. Not just new readers coming for the Marvel promo, but existing customers who can't access their accounts.

So, here are a couple of points to start with that I think should be blisteringly obvious:

The very idea of restricting access to a free digital giveaway is completely fucking insane.

Why put DRM on something you're giving away for free? What conceivable reason is there for this? Why would you want to restrict copying of a free promotion that you are doing?

And why only make it available from a single distributor?

I mean, I get the reasoning behind that one, at least: they want to turn people into Comixology customers. They don't want people to just grab the free comics and never bother coming the the Comixology site. I get the theory.

But in practice, well, how's that working out for you guys? You getting any customers out of this thing?

Here's the right way to do it: just post all 700 files in a big torrent file. Make them CBR/CBZ format. And stick an ad for Comixology in every file.

Ever see a popular torrent collapse under the weight of high demand? Of course you haven't. Because that is the opposite of how BitTorrent works. BitTorrent is at its absolute best on files that are in high demand.

Now, I know why media companies don't take advantage of BitTorrent: because that would legitimize BitTorrent. As far as the publishers are concerned, BitTorrent is synonymous with piracy. They want the protocol banned entirely -- so of course they're not willing to acknowledge that it can be used as a tool for legal distribution, and a very very good one at that.

So instead, they opt for DRM-encumbered files distributed through a traditional client-server model -- and create this gigantic fucking debacle. And you know what their takeaway from this is going to be? "Well, obviously we need to make sure we've got more bandwidth next time." They're going to think that the problem is that their stupid distribution model wasn't implemented correctly, not that their stupid distribution model is stupid.

"Let's just make sure we've got more bandwidth next time" was EA's solution to the authentication problems that Spore users faced in 2008. 5 years later, did it work?

As long as you're thinking that the fix is a better delivery mechanism for DRM-infected content, you're doing it wrong. The problem will persist.

But you know, there are lots of great digital comics out there that aren't from Comixology and aren't DRM-infected. I've gushed about Mark Waid's Thrillbent before; those are all DRM-free and free to download. I also enjoyed the first issue of Dracula the Unconquered by Chris Sims, Steve Downer and Josh Krach; it's DRM-free and only costs a buck.

The point here isn't merely to castigate companies who do it wrong -- please reward the ones who do it right.