Stinkfoot, from A Token of His Extreme, a Zappa TV special from 1974 which never aired but has just been released on DVD by Eagle Rock TV. This video is from the official eaglerocktv YouTube account.

It's available for purchase on Amazon; that's an affiliate link and I'll get a small kickback if you use it to buy the DVD (or anything else).

The Muze Jazz Orchestra, just a few short weeks ago.

And cloudy and humid.

When I stepped out the door after work, I actually groaned, "Oh, Jesus."

When I say "It is literally an oven out there," it's not because I'm one of those assholes who uses the word "literally" to mean "not literally". It's because today at work we had a potluck, and the people who brought hot food just left it in their cars until lunchtime to keep it warm.

When I got in my car I burned myself on the turn signal -- and I'd had a shade in my windshield all day. On my way home, I was relieved when I got close enough to see that whatever's on fire and billowing a huge cloud of smoke into the sky is a good ways northwest of my house.

Tomorrow's forecast is 119. Which, well, I guess the good news about when it gets up to 119 degrees is it's probably not going to get any hotter. (Phoenix's all-time record is 122, and that was 23 years ago.)

And while the humidity is awful, it also means the monsoons are coming and we won't have to put up with this shit for much longer.

And the other good news is, I have made it back to my air-conditioned home and I have no reason to step outside again for days.

My pants are off, and they are staying off.

I've posted these bits from Scott McCloud's Understanding Comics before: 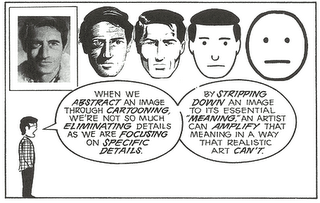 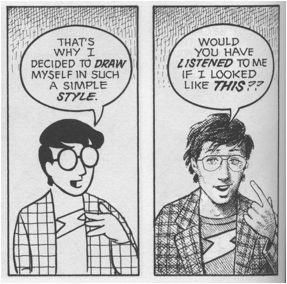 McCloud mentions, in one of his essays in the Zot! collection, that when he was working on Zot! he studied Peanuts and tried to figure out how Schulz managed to convey such a huge range of expression and emotion with such simple drawings -- and that this line of inquiry ultimately led to that chapter in Understanding Comics.

And you know who's got this whole "simple cartooning" thing down?

The other week my wife and I took our 2-year-old nephew to the comic store. He made a beeline for a display case full of Batman statues. He looked at all of them, excitedly chanting "Batman! Batman!" But there was one he focused on more than any of the others: 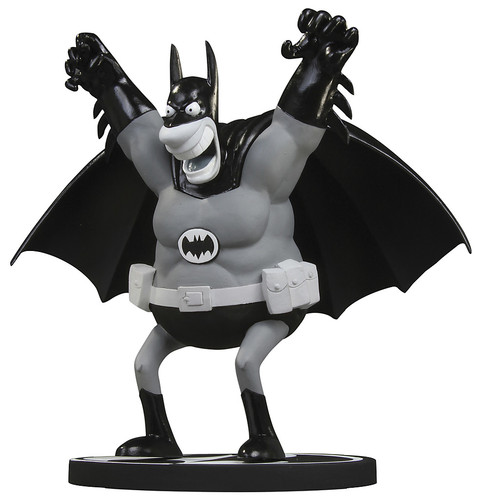 He was excited. He was tapping on the glass. He was enthralled.

And I got to thinking, what is it about Aragonés's art that has that kind of appeal? That speaks to a two-year-old, even through two whole shelves' worth of Batman figures?

Just look at it -- the pose, the arms, the fingers, the teeth, the eyes, the nose, the cape, the skinny little legs.

It's expressive. It's funny. It's exciting. And it's exaggerated as hell.

A collection of body parts in a bunch of simple shapes, most of them big and round.

It speaks to us on a fundamental level. A level so simple a two-year-old can see it.

Aragonés is a master. He may be the greatest living cartoonist. I wouldn't argue with someone who suggested he's the greatest of all time.

I was at Phoenix Comicon last month. Most of the artists were approachable. Eastman and Capullo were the only two who had real lines -- and they didn't just have lines, they had three-hour ones.

So my TMNT #50 went unsigned, because there's no damn way I'm waiting in line for 3 hours to meet Kevin Eastman.

I guess that brings up the question of what artist I would stand in line 3 hours to meet.

And I think, maybe, maybe Aragonés. If he ever came to Phoenix, and was just sitting in Artists' Alley signing things instead of spending the entire time doing panels. He'd be the one guy I can really think of who I'd be happy to wait that long to meet. Not Spiegelman, not Clowes, not Crumb, not Los Bros Hernandez -- I love those guys, but I wouldn't wait in line three hours to get their autographs But Aragonés? Yeah, maybe.

And I guess maybe Jaffee, too.

DRUMline interviews Joe Travers of Zappa Plays Zappa, who discusses, among other things, his longtime friendship and collaboration with Dweezil and Ahmet, his preservation work on the vault, and Frank's love of sound in all its forms. Uploaded by Michael St. John.

And remember, you can buy some of the recently-excavated work from the archives at Barfko-Swill.

If you want a good rundown of US v Windsor and Hollingsworth v Perry, you could do a lot worse than A home run but not a grand slam for gay-marriage advocates: In Plain English by Amy Howe of SCOTUSblog.

Meanwhile, Ken White of Popehat -- who has previously described gay marriage opponents as "dinosaurs snarling at the asteroid" -- gives us a fun Then 'n' Now contrasting June 26, 2013 Antonin Scalia's insistence that DOMA is not intended to discriminate against gay people with June 26, 2003 Antonin Scalia's citation of DOMA as an example of legislation that Americans feel "protect[s] themselves and their families from a lifestyle that they believe to be immoral and destructive," once again reminding us that the major difference between Antonin Scalia, a clown, and a professional wrestler is that nobody put any talent or creative energy into designing the silly outfit Scalia wears to work.

On the long road toward our gay brothers and sisters receiving the same legal and social status as my recently-married ass, this is just one more step -- but it's a big one.

My immense gratitude and thanks to Justices Kagan, Sotomayor, Ginsburg, Breyer, and Kennedy for choosing the right side of history, whose arc, I'm told, is long but bends toward justice.

And to all my LGBT friends and family, tonight I raise my beer in your honor. Even those of you who prefer martinis.

Another one from tribute band Z3 uploaded by Soundoholics; this one's still fresh, barely more than a week old (6/17). Tough to hear the voices but the instruments sound good.

So this past Saturday I finally went to see the doctor about the dizzy spells I've been having. (I realized, after I got there, that my existing GP doctor is listed as "in network" on my new insurance's website but also has a smattering of disclaimers around it saying that's no guarantee of coverage. So I've got that to worry about now, too. Man, healthcare in this country...)

She agreed with my assessment that it's most likely a result of allergies and congestion around the ears. She told me to buy some maximum-strength Sudafed (an ordeal in and of itself; I hate the hassle of buying Sudafed -- but hey, totally worth it since it's done such a great job of solving Arizona's meth problem!), use my nasal rinse, and drink lots of water, to get my nasal passages rehydrated and clear out the gunk.

I'm a few days in, and it's hard to say whether I feel better or not. The nasal rinse is one of those things that always feels legitimately unpleasant but does clear up the passages -- aside from the part where you drip varying combinations of snot and saltwater out your nose for the next few hours. When I'm not dribbling like a leaky faucet, I am breathing better than I have been.

Still feel congested, though. Still dizzy, and had a wicked headache today besides.