Zappa Plays Zappa. According to uploader tsaromero2008, the recording is from a show in Chicago, 2008.

I do not expect that I will wind up working in a gas station.

Good Riddance by Green Day, as performed by Glen Campbell

You know, that was a pretty good job.

I wrote about it last year, and my final analysis remains much the same -- they treated me right. They trusted me, they didn't micromanage, they paid me fairly, and in return I kicked ass and helped them roll out Windows 7 to over a thousand users. Job well done.

And the trouble with that is that there's no need for me anymore (at least, as far as the bean counters are concerned -- as far as the guy who's got to do all the imaging and packing himself now is concerned I will be sorely missed). But so it goes -- my dad's in construction; he's spent his life doing work where he knew one day the job would be done and he'd be on to the next thing.

So I'm on to the next thing, whatever it may be -- signed up for unemployment; hope I don't have to accept it. I've got an interview tentatively lined up for next week -- a place that's closer, pays better, and is direct-hire.

And that's the good news, really -- I feel like I'm moving onward and upward. I feel like there's progress and each job's a step up from the last (with an exception or two, I suppose, but this wasn't one of them). The agency keeps submitting me for jobs, and all of them are a step up from where they've placed me in the past. I think part of that's that the economy's improving and there's more work available for a guy with my qualabilities, and part of it is that I've paid my dues and they know they can trust me wherever they put me.

I was driving home today, thinking to myself hey, that's the last time I'll have to take this 25-mile drive, and feeling pretty good about it. And on the radio? Well, not Good Riddance, but something else topical -- Hello, Goodbye.

If you've ever been laid off, you've probably experienced this: they tell you that your services are no longer required, and then pile a shitload of extra work on you.

The week ending 9/28, I imaged 25 computers and shipped 36. This week I've imaged 42 and shipped 56, and it's only Wednesday. And that's just the upgrades; that doesn't even include the new hires -- because in the immediate aftermath of being told the company can't afford to hire me, of course I am immediately inundated with a bunch of shipping requests for all the new people they're hiring.

Sometimes it's hard to stay motivated. But as I've said before, in the absence of promotion (or even continued work) as an incentive, there's still professional pride and loyalty to the guys I work with. They're not the ones who made the call to lay me off, and they're the ones who are going to have to do my job on top of their own in a couple of weeks. I may as well make that transition as smooth as possible for them.

Plus, if we do huge numbers my last few weeks here and then they suddenly start to fall behind as soon as I'm gone, well, then I've left a handy chart they can show the bean-counters, in the language bean-counters understand best.

You know, it feels different this time.

The last long-term contract I had ended in 2010 and was followed by three months' unemployment (aside from a few freelance Web assignments).

This time I've already had an interview. Haven't heard back from them (they never call when they say they will -- you know, I've often made the unflattering comparison between looking for work and trying to meet women, and I'm afraid it's once again apt here) but I think it went pretty well.

And today I got a cold call. Well, a bulk E-Mail, at any rate. Only for a three-day job, and it steps on the last few hours of my current contract, but I think I can make it work.

Good pay for three days; obviously I'd rather get something longer-term, but it beats the hell out of unemployment.

Seriously, unemployment sucks; I very much hope to avoid it. We'll see...

Today was the celebration for the end of the project I'm on.

I'll be honest -- I wasn't terribly in the mood for celebration. The thing we were celebrating is the same thing that means I will be filling out an unemployment form two weeks from now.

(That's a little glib. My temp agency has, once again, stepped up; I've already had an interview and even if that doesn't work out they told me they've got another bite. Still and all, the point is that with the project over I've got my walking papers, wherever I may be walking to.)

The boss took us out to lunch. And one of the help desk guys asked me, "So what's next for Thad?"

This is exactly the kind of thing that I would have assumed would upset or depress me -- people actually acknowledging that yeah my days here are numbered. (Ten.)

But it didn't. The way he said it -- friendly, upbeat. Optimistic. Just the assumption in his phrasing -- there is something that's next for Thad.

And that cheered me right the fuck up. After that my day wasn't such a downer.

And then we went and raced go-karts.

Hate that this happens right as my job's up in the air. Not so much because I'm worried that my bosses will think I've got a chronic condition that interferes with my work (I only miss a day every couple months, and they've always been pretty understanding, especially since I haul ass when I'm there), but because I don't get sick pay and every day I miss is a cockpunch right in the wallet.

(Look, my wallet has a cock. I don't really want to talk about it.)

Good news is that I pretty solidly whomped the headache with a full dose of codeine first thing this morning followed by going back to bed for six and a half hours. But that left me pretty weak and dizzy. Beats a migraine but still leaves me pretty much no good for a whole day.

So today I got the old "Well, the project's almost over and we don't know what that means for you" talk.

As per usual, if it were up to the discretion of people I have actually met, I'd have the job. But, as per usual, I am at the mercy of west-coast bean counters.

The thing about that: when you complete a project weeks ahead of schedule, the people who have actually met you think, "Hey, maybe we should keep this guy around." But the bean counters tend to think, "Oh good, that means we can cut him loose that much sooner." Here's hoping the people who value me win the argument for a change.

Apparently I've got, at the very least, two weeks left. Which could mean I become unemployed just in time for my thirtieth birthday. I don't think it'll be that soon, but man that would be a fun little extra coincidence.

So it goes. I'm sanguine, I guess. I'd like to keep my job -- it's a good gig, it pays fairly, I'm settled and I like the people I'm working with -- but you know, if I'm forced into another change of scenery, I'll make the best of that too.

If nothing else, there are plenty of companies that could still use a guy who can handle a Windows 7 migration.

Well, this one's a first.

Today, as I was removing a computer from a box, I saw a bit of movement in the bottom corner. It appeared to be a small kind of gecko or suchlike.

This was a return from an office just a half-mile or so away, so I was confident that it was not some kind of horrible invasive species of lizard. I emptied the rest of the items from the box and took it downstairs.

It took a considerable amount of coaxing and, eventually, pushing it a little with my finger, but finally I got it out of the box and into the rocks.

Someone shipped an old computer back today -- one of the models that I always cringe to see, because they are bound to be encrusted with dust, and because I then inevitably have to open them up and pop the hard drive so we can wipe it before disposal. They are hell on my asthma.

And then I opened it up and...wow. Immaculate. Either this thing has been sitting in a sealed plastic bag for years and never opened, or someone actually went to the trouble of opening it up and blowing it out before shipping it back to me.

So thank you, whichever user was kind enough to do that for me. You are awesome.

(And okay, it was two months late. But given the choice, I will take late, clean equipment every time.)

So last Thursday I mailed a package. New hire; needed to be there next-day. But it was in Phoenix, so I chose express shipping. Because, you know, it takes less than a day to drive a package 9 miles.

Today I find out it hasn't arrived yet, so I pull up tracking. And I see this goddamn fucking bullshit: 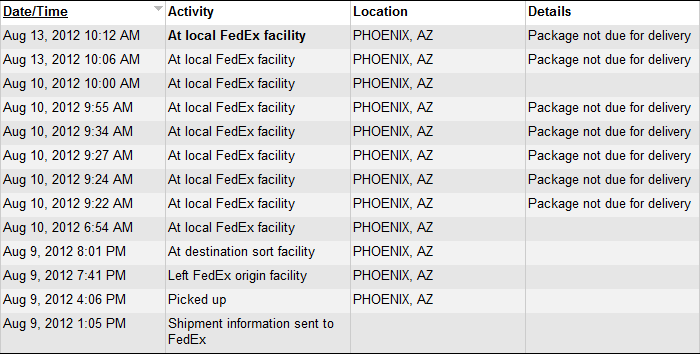 The package is sitting in a fucking warehouse for three days, because I did not pay extra for next-day delivery. This is a thing that FedEx does now.

They've got the package. They've got it all set to put it on a truck and take it to its destination. But if you don't pay for next-day delivery, they won't deliver it next-day, no matter how short a distance it's going.

I guess what I'm saying is, support your local post office.