Now, I love me some Grant Morrison. He wrote the quintessential Superman story, he made me revise my "I hate the fucking X-Men" policy, and just look at what he's done with Batman.

Now, I've been told for years that it's a classic run, and so I finally picked up the first trade the other day. And I have to say...what the fuck is this shit? 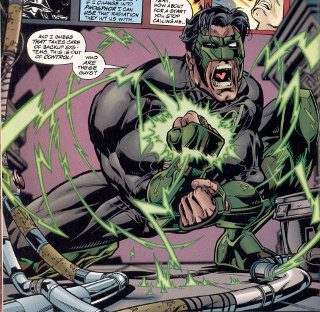 Yeah, it would be a lot easier to appreciate the spectacle of the seven greatest and most iconic DC superheroes if they didn't look like this:

Hell, let's take a look at that entire Popeye Flash panel; it's a great "goofy faces" picture in and of itself: 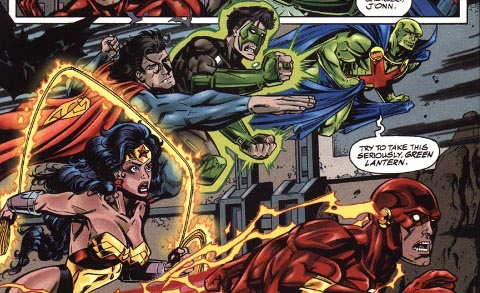 And of course the 1990's art aesthetic didn't just apply to the pencils -- let's see some Photoshop Blur! 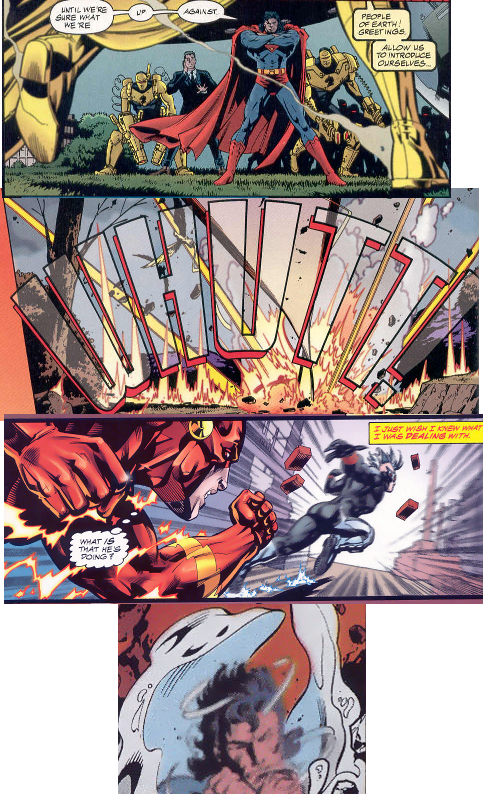 WHUTT! indeed. And the Photoshop problems don't stop there. It's not really easy to tell onscreen, but I can assure you that on the printed page, there are badly-antialiased fonts and jaggy pixels on backgrounds.

Now, I'm picking on the art a lot here, because it is a constant barrage of pure eye-searing awfulness, but what about the story? Can a brilliantly-written Grant Morrison story redeem truly reprehensible art?

Well, as we all know from New X-Men, the answer is "sometimes". Unfortunately, that doesn't happen here. In fact, I'm not entirely convinced this story was written by Morrison, or even a human being; it reads like it was written by the Justice League Cliché-o-Matic 5000.

New superhero team shows up and promises to save the world? 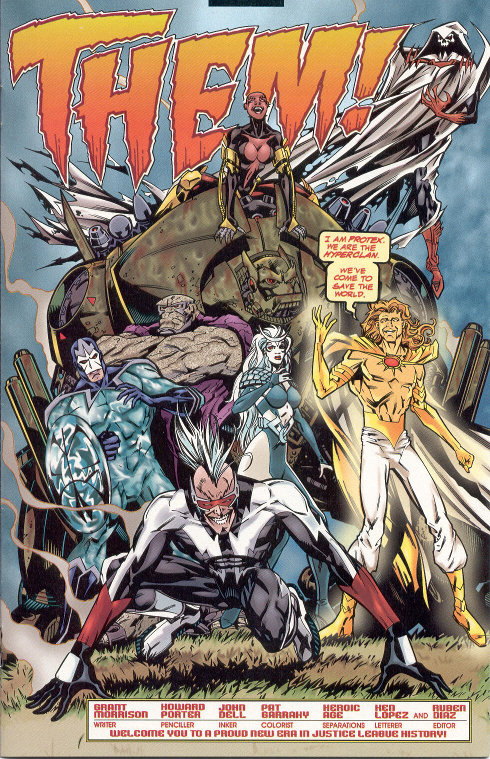 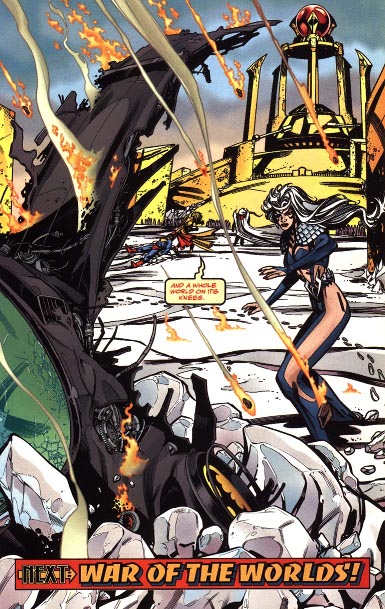 Check. They lose because they underestimate Batman?

Check. Martian Manhunter is set up as a traitor because he's an alien who doesn't fit in... 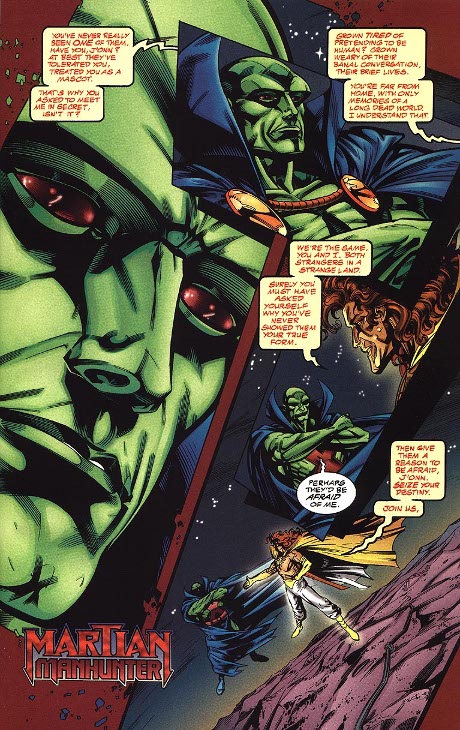 ...but it turns out he was a double-agent the whole time and he's still on the JLA's side? 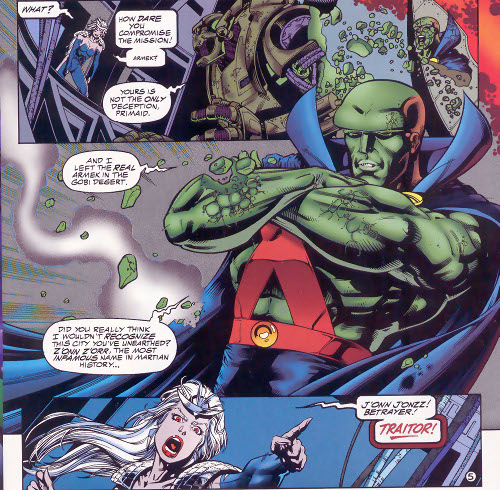 Check and check. (An aside: that's the one artistic touch I really like in the book, is the Martians' shape-shifting depicted as clay crumbling off and reshaping. So kudos for that.)

Overcompensating for the fact that everyone makes fun of Aquaman by constantly showing that no really guys, Aquaman is a total badass!? 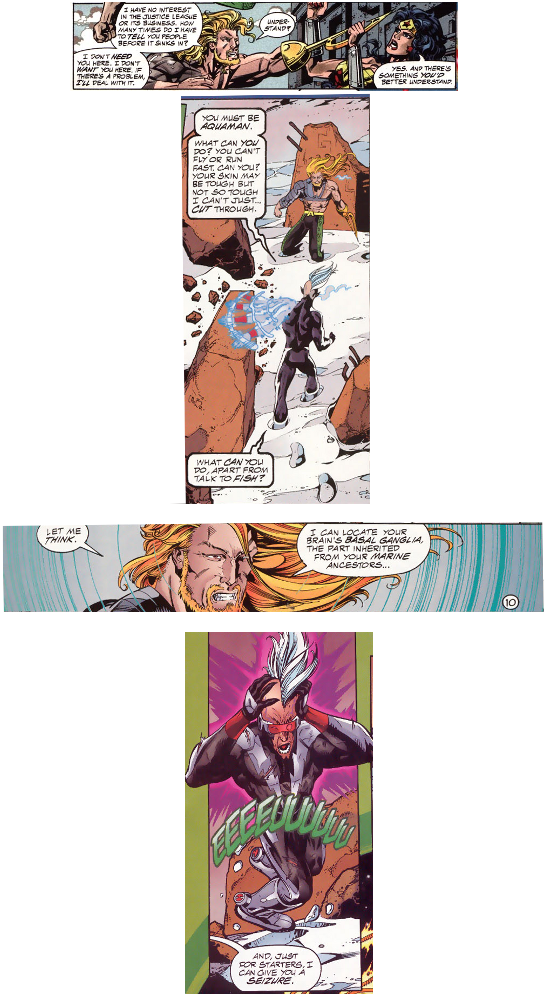 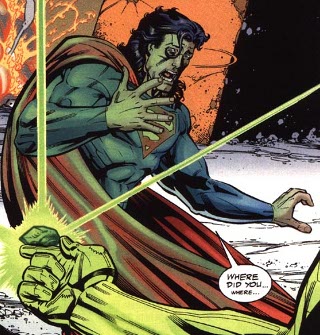 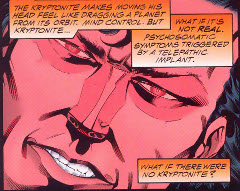 Ha, good one, Grant. Almost had me there. But I'm still pretty sure I had a Bingo two clichés ago. ...okay, one more.

Facile explanation for why the JLA doesn't just fix the world like the bad guys said they should? 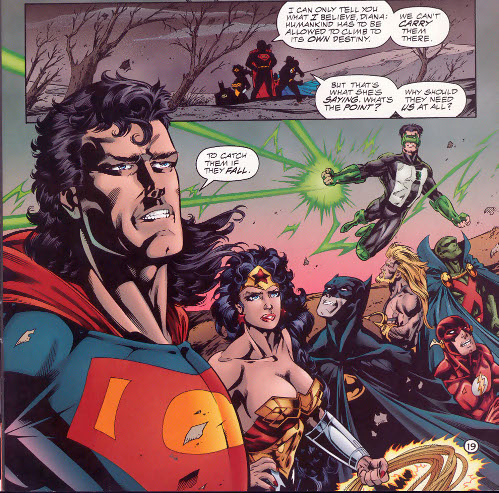 Check. Also, what the hell are they all looking at?

Soooo yeah, a JLA story that would have sent me to the hospital if I'd made it into a drinking game, complete with Liefeld-lite 1990's art atrocities.

My question is, does it get better after that, or has everybody been having fun at my expense and this "classic" run is actually that terrible all the way through? Should I bother picking up any of the rest of it, or just skip to Earth 2? Please advise, Internet.