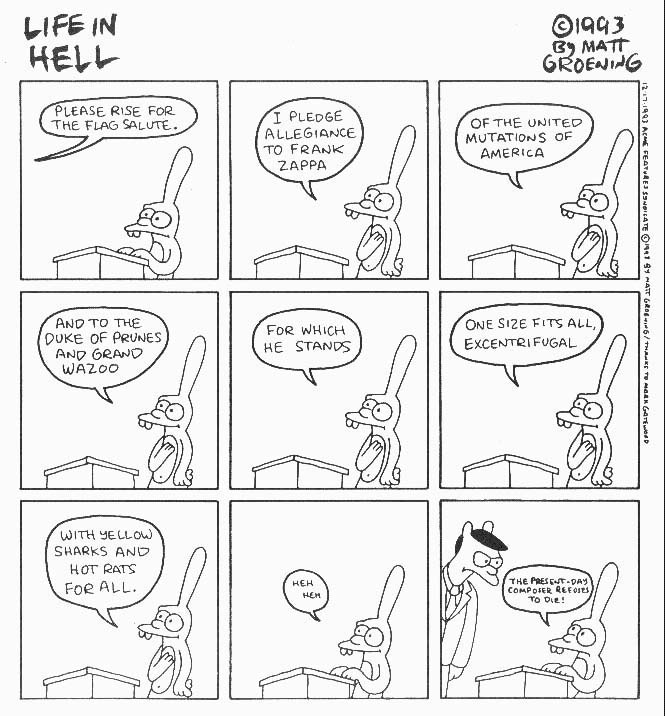 My dad had this up on his fridge for years, and I stuck a copy on the door of my dorm room in college. It ran a couple weeks after Zappa passed.

Groening, of course, famously said "Frank is my Elvis."

(Sorry for the lack of attribution on the scan -- which is much more legible than any other copy I've found online -- but this really is the copy I printed and put on my door about a decade ago and I have no idea where I originally found it.)

Something that always bothered me:

Okay. So Cranky Kong is supposed to be the original Donkey Kong, right? Except now he's old and cantankerous and has a long white beard.

Now, I'm no expert on anthropomorphic video game gorilla physiology. But it seems to me that thirteen years is a bit of a short time to shrivel up and grow a long white beard. (And that's without even considering DK's appearance in the 1994 Donkey Kong remake just months earlier, looking perfectly healthy.)

I guess that, of all the places to draw a line in the sand for suspension of disbelief in a game about anthropomorphic, barrel-hucking gorillas, "How did that one get so old so fast?" seems rather an arbitrary place for it. But dammit, it bugged me.

Unless -- and here's my theory -- the original Donkey Kong died of old age, the Cranky Kong in DKCR is actually the 16-bit Donkey Kong now old and decrepit, and the Donkey Kong you're playing as is actually...a now-fully-grown Kiddy Kong.

Course, then you still have to explain Diddy, Funky, and the rest of the Kong family.

Anyway. Here's the trailer for Wreck-It Ralph. Which, while not technically a movie about Donkey Kong, appears to be a much-better-thought-out story of Donkey Kong's journey from villain to hero than the Donkey Kong Country series.