The whole thing's on Wiki Jawaka -- just the text, no titties (though the language, as you would expect, is NSFW).

Some excerpts that I think fit the Democratic Convention theme:

Was it surprising that you had fans behind the iron curtain?
Yeah, and lots of people who didn't like me -- like the secret police.

What did the secret police have against you?
In Prague, I was told that the biggest enemies of the Communist Czech state were Jimmy Carter and me. A student I met said that he was arrested by the secret police and beaten. They said they were going to beat the Zappa music out of him.

Sometimes you sound like a political candidate. How serious was your plan to run for president?
I wanted to do it. It's a bit hard to mount a campaign if you have cancer and don't feel well.

If you hadn't been ill, would you have run?
Yeah. And it's a shame. We got calls and mail throughout the election. Squadrons of volunteers called.

If you had run and won, what would President Zappa have done?
I would have started by dismantling the government. At least I would have presented the idea to the voters.

Nothing too revolutionary?
In the Beltway and places that have large federal payrolls, the idea wouldn't be too popular, but in other places people would think it's great. One strong selling point is that you could do away with federal income taxes, or at least reduce them to a point that people would have something left at the end of the week. In the end, I think people, in their enlightened self-interest, would consider voting for that.

If you dismantled the government, you'd put yourself out of a job.
No, because most reasonable people would agree that we need roads, for instance, and water you can drink and breathable air. Most people realize that there has to be some coordinated infrastructure and a national offense that is commensurate with whatever threat you feel from other countries.

You've said that you're not a peacenik.
Human nature and human stupidity often breed violence. When violence escalates to an international confrontation, you should be able to protect yourself. On the other hand, to plan for it -- like we did throughout the Cold War -- based on badly handled intelligence estimates of the threat to our national security is just stupid. Most intelligence estimates indicated that the Soviet couldn't do shit to us, but they were ignored order to maintain the level of employment and financial activity in the defense industry.

Do you think that our recent election was irrelevant?
Yes, because America has to be completely restructured. We have to question every institution in terms of efficiency. I'm serious about abandoning the federal system.

Is there any way that it's likely to happen?
Not this week, but I wish people would at least consider it. They think, There it is, we're stuck with it, it will go on forever. It doesn't have to. The Soviet Union didn't go on forever. If you want reform, the people who've been doing a bad job have to get fired. They have to go back to the used-car lot from where they came.

Yet you've always pushed people to vote. Why bother?
Even if you don't like the candidates, there are issues that affect your life. Bond issues affect your pocketbook. That's the only real reason for voting. As far as the rest of government is concerned, forget it. The amount of overstaffing, overlapping, wasted energy and pompous pseudograndeur is science fiction. All of it is supported by this universe of political talk shows. CNN is one of the worst offenders on the planet. It maintains the fiction of the theoretical value of the thoughts and words of these inferior human specimens who manage to become Beltway insiders.

Do you want to name names?
Do we need to see John Sununu as a talk-show guy? Or, on CNBC, Gordon Liddy or Oliver North? Let's face it: Some of these people are criminals. Why do we need to be presented with them as voices of authority whose opinions are something we should even waste our time with? Why?

What do you think is behind it?
It's a whole program designed to modify behavior and modify thinking on a national level. They're happy to take the slings and arrows of the outraged minority in order to keep these voices of stupidity in your face all the time. It's all propaganda.

How planned is it?
Completely. It is the residue of the domestic-diplomacy department that Reagan established during the Irancontra days. The idea was to control the news. From that office, a guy would make phone calls and certain journalists would get fired and news stories would get changed. Then it was the obvious control of the media we saw during the Gulf war.

So you maintain that the media are no more than pawns?
The media are part of the package. You think really liberal people own those outlets? I don't. Even if they were Democrats, it wouldn't mean anything, because who can tell the difference between those two criminal classes?

it sounds as if you are as cynical as ever.
It's hard not to be.

Yet you feel it's worthwhile to raise some hell?
Pessimism and the natural instinct to raise hell are not mutually exclusive. Raising hell comes naturally to me. Still, I am not optimistic about what will happen to this country unless some radical change is made. It's going to take more than just firing a few bad guys.

It must have been strange for you when Al Gore was nominated as vice president.
They felt it was a good way to counteract the Dan Quayle-family values nonsense. But why would anybody need to counteract Dan Quayle?

They obviously didn't care about your vote -- or the vote of the people concerned about Tipper's ratings campaign.
Not necessarily. Deep in their hearts, those politicos think they're really cagey strategists. They figured they'd get a certain amount of column inches because of Tipper. It was advertising they didn't have to buy.

Tomorrow I'll see if I can't find a funny song to post. 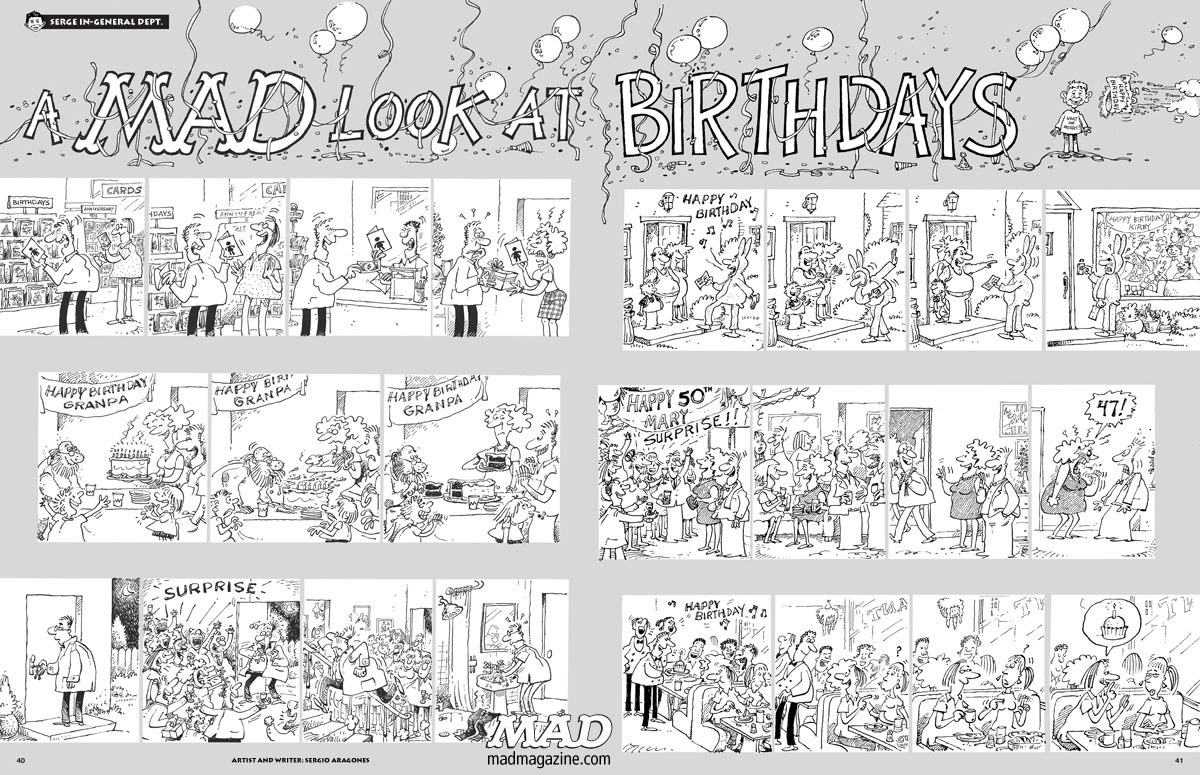 The guy's work is legend and his life's been amazing. I am loving the hell out of his current book at Bongo, Sergio Aragonés Funnies -- sadly, it's been delayed these past few months as he had a back injury, but I'm looking forward to its triumphant return when he's back at 100%.

Apparently by coincidence (as they don't mention his birthday), today ComicsAlliance's Duet on Solo feature highlighted the Aragonés issue, which was really a precursor to Funnies. I particularly love his autobiographical stuff, and a story in that issue called "I Killed Marty Feldman" is one of my favorites.