I was planning on writing about last week's excellent issue of Saga, but I haven't gotten around to it.

I'm planning on eventually writing about my concerns about the new, Priest-and-Bright-free Quantum and Woody series, but I'd like to wait until there's more information and, ideally, Priest and/or Bright themselves weigh in.

I got a job this week. That's a pretty big deal. Actually I had to choose between two offers, which isn't a dilemma I've had since, oh, 2006.

Today I peed in a cup, bought comics, and went to my cousin's fourteenth birthday party. It was a good time.

Mostly I'm very much looking forward to getting back to work. I'm a little nervous about the new job, as I am every time I have a new job, and a little nervous about whether I've made the right call, as I am every time I have to choose between two jobs. But I'm not a big worrier. What will be will be. It'll turn out, eventually. Keep moving forward.

Kept busy enough today. Filled out more paperwork, got a drug test, submitted a voided check for direct deposit, had a brief and unexpected phone conversation with a prospective employer.

Spent most of the evening just kicking back with my brother; he's heading back to Maui in a few days. Here is a picture of the two of us at my wedding. 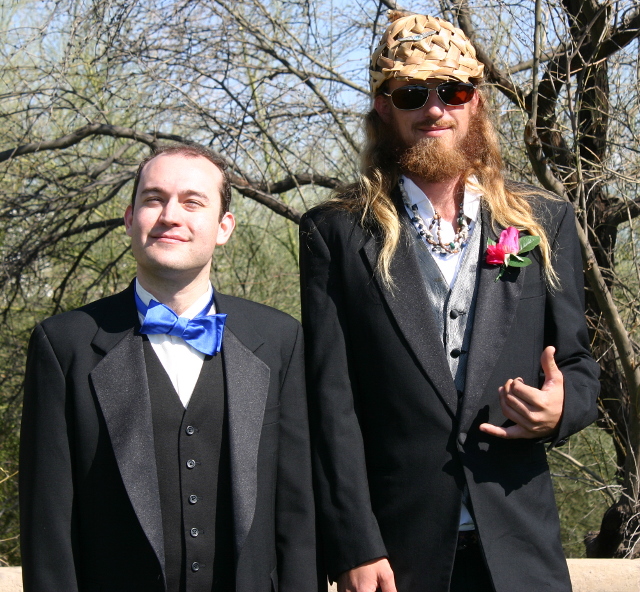 Don't see enough of the kid anymore; it's been about three years since the last time. Will try and make it out to Maui again one of these days once I've got some money saved up. Which is why I'm filling out paperwork and peeing in cups.

Also, while my cold is getting better, my allergies were just awful today. Yeah, I get it, it's spring now.

Well, I guess I did all right at at least one of those interviews, because I've got a job offer.

It's the one up at the damn northern border of Phoenix -- God only knows why I keep getting jobs way up there. It's a pay increase from my last gig, which will hopefully be enough to cover the extra wear and tear that a 70-mile daily round-trip will wreak on my car.

Still, pretty happy about it. Will be happier if I get one of the other offers, but still, this is a step up from my last job and a big step up from unemployment.

And it looks like it's good leverage. I met with the other agency today and it looks like they're pushing to get me more money and fast-track me into the opening. Fingers crossed, but the important thing is I've got a job either way.

Also while I was waiting in the lobby at the agency I saw the news that Quantum and Woody is coming back.

A job and new Quantum and Woody? This is, like, the third-best day I've had all month.

I've never been very good at gauging my performance at interviews. 'Cept maybe that one in 2011 where they misheard me and thought I called myself a slacker. I was pretty sure that one wasn't going anywhere.

Anyway, had two today. Neither the ideal company but either I'd be happy to take, under the circumstances. We'll see how it goes.

The first one was way up north. I managed to drive past my old apartment complex and two of my old places of business. There was a traffic accident on the freeway, so I had to take a detour, but I'd left early enough that I still got there 20 minutes early. Which was good, because I wound up waiting at the gate for 10 minutes while the security guard confirmed I was really there for an interview.

After that I still had enough time to stop by Ray's for a couple of slices of pizza -- provided I was willing to put up with the certainty that I would hit traffic on the freeway if I took half an hour to eat.

The 17 was actually surprisingly breezy, but I ran into trouble as soon as I got on the 10.

And when I say as soon as I got on the 10 I mean it. Like, no sooner had I merged onto the on-ramp when someone in the next lane decided it would be a great goddamn idea to merge directly into the space that my vehicle was presently occupying.

I made it out without a scratch and with only a little bit of leaning on my horn. And still managed to make the next interview a half-hour early.

I've got another tomorrow, sort of. It's not an interview per se, it's a meeting with a rep at a new temp agency to prep for an interview.

We'll see how that one goes, too.

I'm doing my usual app stuff this week. But I'm getting a lot more calls back than I'm used to. First quarter's ending; people are hiring.

I wish I were going into them healthier. I'm still getting over this damn head cold, with the added bonus of nasty side effects from the antibiotics I'm taking for it. I'm not at the top of my game, and that's frustrating -- nothing like losing out on a job because they called you up for an interview when you had a cold.

But what the hell, I'll go in and do my best, same as any other interview. Maybe it'll go somewhere and maybe it won't -- but at least at the moment there's a window where I'm in demand, and hopefully it'll last a few weeks, anyway.

So the site didn't resolve for a good chunk of yesterday. That's down to a problem with the hosting provider; both its nameservers were down. That's a fucked-up day; I sure am glad I don't work there anymore.

I should probably back this thing up more often, just in case. I write up all my posts in a text editor anyway, and could restore them by simple copy-paste if ever needed, but it would take awhile.

Running the backend of the hosting company (which also offers rent-an-admin services, and which at the time was also a DSL and dialup ISP) is the toughest job I've ever had -- and the worst-paying, which is why I finally left; I'd have been happy to take a high-pressure job or a low-paying one, but not both at the same time. I've certainly got my share of bad memories of being called in on a Sunday due to a network meltdown -- actually, again, it was the third or fourth consecutive time that happened on a Sunday when my boss had promised to cover it and said it was okay for me to take a 25-mile trip to Tempe that I decided I couldn't keep doing it.

That boss is long gone, though, and another of my old bosses is back in charge. I'm glad he's got things in hand but I sure don't envy him -- and keep in mind, that's coming from a guy who's been unemployed for the past four months.

I had a meeting today for a local business that some clients of mine are working on opening.

It involves ziplines, and there was a demonstration of zipline technology.

One of the components -- a proprietary piece that helps keep carabiners shut -- is called a tweezil -- I'm not sure if I've got the spelling right, but that's how the guy pronounced it, anyway.

And he confirmed that yes in fact it is named after Dweezil Zappa, as a tribute, because its inventor is a huge Frank Zappa fan and vowed that his first great invention would bear that name.

(Can't find any documentation of this offhand online, so if anybody can lead me to more information I'd be happy to link it. But that's what the man said, anyway.)

My third audiobook is available from Audible, Amazon, and iTunes. It's called Dinner on a Flying Saucer and is written by Dean Wesley Smith. The publisher's description is as follows:

Sometimes, when a fella gets to help out with fightin' a war between two alien races, it's just not such a good idea to tell your wife. Sometimes the truth just isn't good enough.

This is my favorite of the three I've done so far. It's a good tall tale and it's got accents; I particularly enjoyed playing the husband as gregarious and over-the-top and the wife as quiet and deadpan.

Be sure and read my first audiobook post for some notes on Audible DRM. And you can discuss my audiobooks at Brontoforumus.

So the audition that I just managed to squeeze out with no dogs barking on it? The book quit accepting auditions sometime between the time I finished it and the time I went to submit it. (It was up less than a day, too -- I guess you can trust that anything with "zombie" in the title is going to be in demand.)

Rejection's part of the job, of course, but this is the first time I've hit the window where the role was cast after I recorded an audition and before I had a chance to send it in.

Ah well -- back at it tomorrow.

Stomach starts gurgling. Make quick PB&J. (For future reference: peanut butter makes for a quick meal but is probably not ideal for recording; mouth gets all sticky.)

Fortunately, I was in the home stretch, because on the third or fourth take I managed to time it just right, in-between canine outbursts, and finish it with no barking on the track.

Still, would have liked to do one more quick track. But the dogs would not shut up. So I biked downtown and back -- and the fuckers were still barking when I got home. I think they barked for two hours straight. Never did figure out what the hell pissed them off. If anything.

Important thing was I got two auditions done. Not as many as I'd have liked, but tomorrow's another day, hopefully without interruptions.

I still love dogs. But man they sure do cramp my style some days.